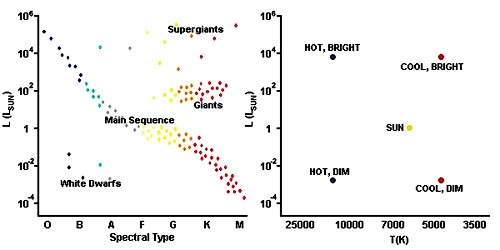 In about 1910, two astronomers, Ejnar Hertzsprung in Denmark and Henry Russell in the US independently plotted a new type of graph, known as the Hertzsprung-Russell diagram, based on the stellar classification results at the time. Horizontally they plotted star temperature or spectral type and vertically the luminosity or energy output of the star.

In these plots they noted that stars do not appear just anywhere, but only in specific regions of the graph. Most stars appear in a band diagonally from bottom right to top left, while a minority appeared in regions above and below this band.

This Hertzsprung – Russell diagram (or HR-diagram) has become a very important instrument in modern astronomy. Since more and better information became available about distance and therefore luminosity, the diagram has become much more precise.

Stars in the diagonal band are called main sequence stars. Appearing in this more or less linear structure in the graph means that there is a correlation between temperature and luminosity; these two properties are related. The higher the temperature of the star (further left) the larger the luminosity or power output (further to the top). This holds for stars that are in the process of fusing hydrogen to helium. The hotter stars are more massive than the cooler ones, they burn faster. So the position of any star in the main sequence gives an indication of the mass of that star.

We also see stars in the upper right (cool and luminous) and in the bottom left region (hot and faint).

But if stars of a particular spectral type (i.e. being on any vertical line in the diagram) have a larger luminosity (total energy output) this means that, according to Stefan-Boltzmann’s Law, they have a larger surface area and thus are much bigger. They are in the class of the Giant and Super Giant stars (top right above the main sequence).

Below the main sequence (bottom left) are stars that are hot but not very luminous. These are much smaller and in the Dwarf category. White dwarfs are the end stage of evolution of stars like our Sun, and are very hot and very compact.

These groupings are very important to understand the life cycle of stars and we will discuss this further in our EBook “Stellar Evolution”.

But let us now look at what the classification in the HR-diagram means for our understanding of the physical properties of stars.