Massive stars have a lot more hydrogen to fuse, so it is a bit counter-intuitive that they have much shorter lifetimes than low mass stars. But they fuse much faster and are therefore much hotter and brighter. Therefore they run out of nuclear fuel earlier than slow fusing low mass stars. They also perish more dramatically when the fusion runs out. 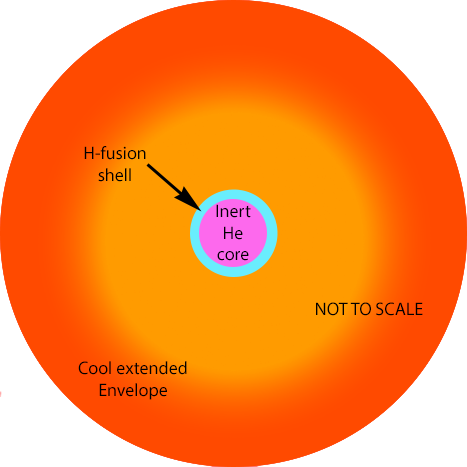 Initially the end stage in the life of a massive star is very similar to that of a less massive star as described above. Hydrogen in the core runs out, but will start fusing in a shell around the core. The star swells up to form a Red Super Giant.
Famous examples are the stars Betelgeuse in Orion and Antares in Scorpius. 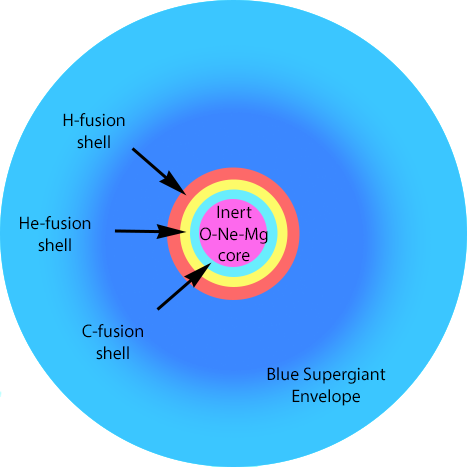 Helium starts to fuse in the core to produce Carbon and Oxygen. The star becomes a Blue Super Giant that is larger and hotter than the previous phase.

When the Helium in the core is exhausted the temperature will increase to something like a billion degrees. Under these conditions (in contrast to lower mass stars discussed on the previous page), the Carbon will now fuse to form nuclei of heavier elements such as Neon, and Magnesium. When the carbon in the core runs out, more carbon, helium and hydrogen will be fusing in concentric shells around the core. 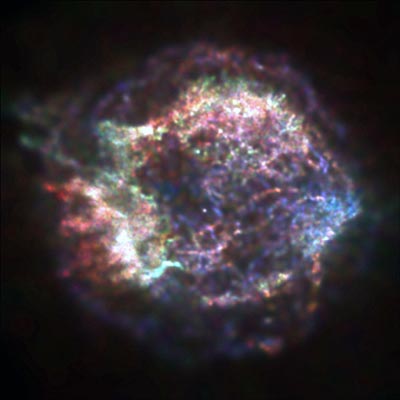 What happens now depends on the mass of the star
When the star’s mass is less than 8 Msun the envelope around the star will be thrown off in a planetary nebula and the core will collapse to a White Dwarf, but now mostly made up of Oxygen, Neon and Magnesium.

Stars with larger mass than 8 Msun will continue with fusion processes in the core.
Neon, Oxygen and Silicon will go through a range of very fast fusion reactions that stop in the core only when finally Nickel (Ni) and Iron (Fe) are produced. Beyond Iron a fusion reaction will not generate but consume energy and this is the natural end stage of fusion in the immensely hot core. These processes do not last more than a few years. The Silicon fusion last only about one day. When that stops the scene is set for disaster. 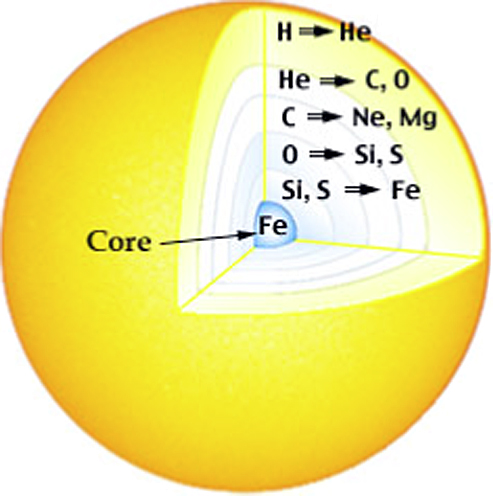 In less than a second, the core collapses from a diameter of about 6000 kilometres to less than 50 kilometres - the collapse happens so fast that the outer layers have no time to react or to collapse along with the core. The electrons in the atomic structure are forced into the atomic nuclei where they combine with protons and become neutrons and neutrino’s. The neutrinos radiate off at speeds near the speed of light, generating further nuclear reactions in the star’s outer region. The core bounces and meets the infalling gas head on. This generates a shock wave that we observe as a supernova. Instantly new fusion reactions produce heavier elements than Fe, enriching the supernova remnant. Some of those are unstable and decay immediately to lighter elements.

A Neutron Star is formed
If the collapsing Iron core is not too big the neutrons resist further compression by neutron degeneracy pressure, in a way that is analogous to electron degeneracy pressure (see above ), but much stronger; the atomic nuclei cannot be packed more densely together. The amount of compression relates to the difference between the size of an atom (including the electrons) and the size of the bare nucleus. This can be a factor in the order of 100,000. The density reaches that of atomic nuclei: one teaspoon of it could weigh a billion tons.