Almost the title of a fairy tale but if it is, it is “fairly” dramatic. And a happy ending? 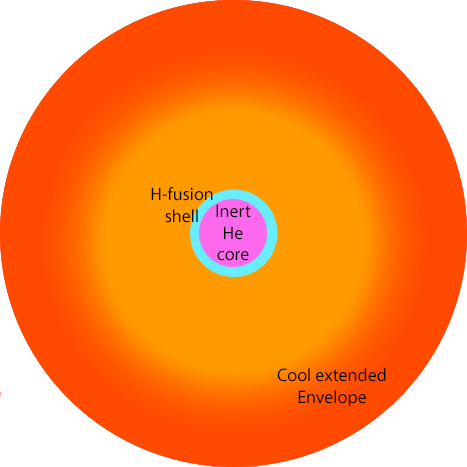 After a “low” mass star up to 8 times the mass of the Sun exhausts the supply of hydrogen in its core, there is no longer a source of pressure to support the core against gravity. The core of the star shrinks and therefore heats up, leaving an outer shell of hydrogen around it that now fuses to Helium. This causes the outer layers of the star to expand very much and rapidly. Due to this expansion the temperature in the outer layers decreases and the star becomes what is called a Red Giant star. Our Sun will become about two hundred times its present size and may even reach the orbit of the Earth.

The circular diagrams on this page and the next are inspired by the lecture "The Starry Dynamo". 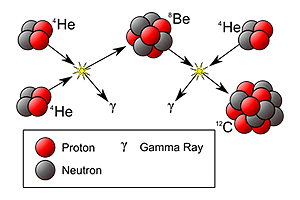 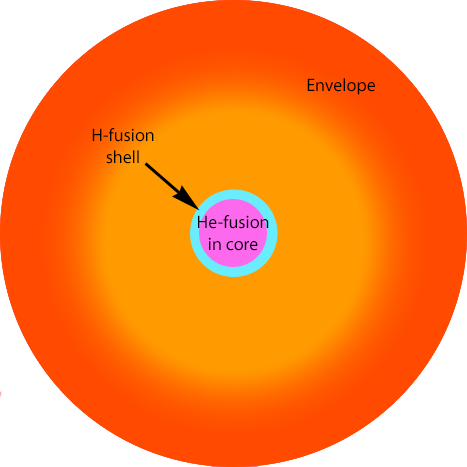 He fusion has started in the core

Hydrogen continues to be fused to Helium around the already hot core and pressure keeps building up inside, until the Helium can start to fuse to Carbon and then to Oxygen in the so-called triple-alpha process. Although the core is now very hot, the outside of the star shrinks and gets fainter. The star now enters the “Horizontal Branch Phase” (more below) 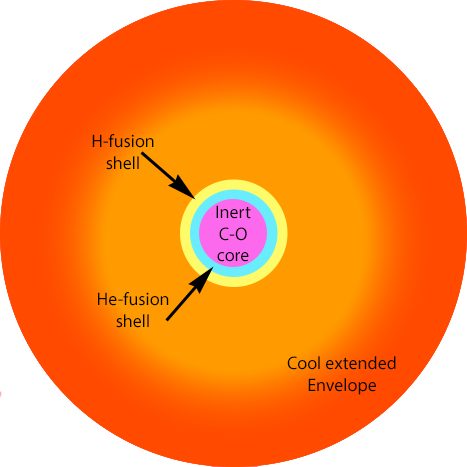 When the helium in the core runs out after about 100 million years, the core now mostly Carbon and Oxygen, shrinks and increases in temperature. Helium continues to fuse in a shell around the core. Remaining Hydrogen in the outer shell continues to fuse to Helium. The star grows rapidly for the second time to a larger Red Giant. 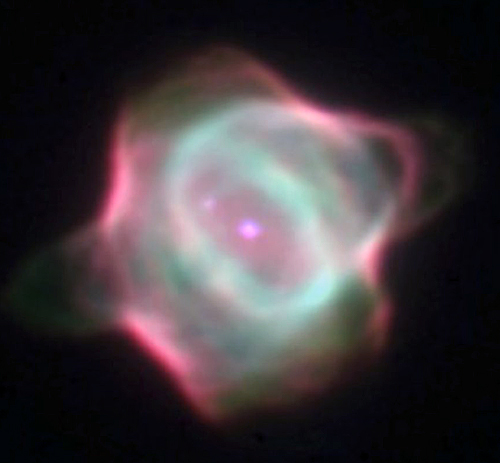 Planetary Nebula
The helium fusion around the core is unstable and the star pulsates, expelling a lot of material from the outer layers. leaving behind a hot core embedded in a nebula of expelled gas. Radiation from this hot core will ionise the nebula, producing a Planetary Nebula. The exposed core is now rich in Carbon and Oxygen and becomes extremely hot. It collapses as there is no nuclear fusion to sustain its size, and becomes a White Dwarf.

When the star is larger than 4 Msun and after the helium in the core runs out, the core temperature can be high enough to continue fusion to Oxygen, Neon and Magnesium (see next chapter).

The Stingray Nebula (Henize 1357) is the youngest known planetary nebula. Twentyfive years ago it was not hot enough to glow as it does today.

Electron degeneracy
The remaining White Dwarf is extremely dense and will pack about the total current mass of the Sun into an object the size of the Earth. Further collapse is prevented by electron degeneracy pressure, which is a state of matter in which atoms are packed together to a minimum volume.

According to the Pauli Exclusion Principle electrons with the same "spin" are not allowed to occupy the same energy level. Since there are only two ways an electron can spin, only two electrons can occupy a single energy level. In a normal gas there aren't enough electrons to fill up all the energy levels. But when gravity collapses the core into a white dwarf, the density is so high, that all the energy levels in the atoms are filled up with electrons. This is called a “degenerate” state. So the White Dwarf becomes stable against gravity, not by nuclear fusion, but by quantum mechanical principles that prevent its further collapse.

There is however a limit to what electron degeneracy can take. When the total mass of the core exceeds about 1.4 Msun there will be a catastrophic further collapse. This critical value of 1.4 Msun is known as the "Chandrasekhar limit."  (More on that below).

White Dwarfs are below the Chandrasekhar limit and are thus stable. They start as very hot objects, but will cool down very slowly, because they do not generate further energy and will eventually become invisible Black Dwarfs. That will take trillions of years.