If the iron core remnant of a collapsing massive star is more massive than about 3 Msun, even neutron degeneracy pressure cannot withstand the force of gravity. Actually, no known condition in the Universe can withstand such forces. The star collapses and continues to collapse. It forms a black hole. Matter disappears from contact with the rest of the Universe in a gravitational warp in space. We have no physics to explain the state of matter inside a black hole, rather than considering it as a gravitational singularity. 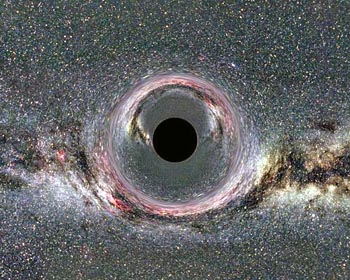 Black Hole warping space around it. Artist impression. We can talk about a surface, but not in the usual sense of the word. There is a region, or boundary in space-time around a black hole beyond which we cannot see. This boundary is called the event horizon. It is an imaginary spherical surface surrounding a black hole, with radius equal to the so-called Schwarzschild radius (escape velocity equals the speed of light), within which no event can be seen, heard, or known about by an outside observer.

No visible light, nor X-rays, nor any other form of electromagnetic radiation, nor any particle, no matter how energetic, can escape from below the event horizon. The radius of this imaginary surface (proportional to the mass) is very small, only about 30 kilometres for a non-spinning black hole with the mass of 10 Msun.

The type of Black hole that results from the collapse of a single star is called a Stellar Black Hole. The mass of a black hole will increase when it captures mass from objects that come too close. The radius of the event horizon will increase by about 3 kilometres for every solar mass that it swallows.

Observing black holes
A black hole itself is invisible but its presence can be revealed through interaction with other matter.

One can see gas falling into a black hole from a companion star in a binary system. This gas spirals inward forming an accretion disk around the black hole, and heats up to very high temperature and emitting very strong X-ray radiation that can be detected. Many bright X-ray binary sources have been discovered in our galaxy and nearby galaxies.

A well studied example of such a binary system involving a stellar black hole is Cygnus X-1 an X-ray binary system at a distance of about 6000 light years. It includes a blue super giant star which orbits a common centre of mass at about 0.2 AU, or 20% of the distance from the Earth to the Sun. The invisible central object is believed to be a black hole with a mass of about 8 Msun. Cygnus X-1 is a widely studied object because of its relative proximity.

Stellar wind from the giant star provides material for an accretion disk around the X-ray source. Matter in the inner disk is heated to millions of degrees, generating the observed X-rays.
More info and image credit here.