An isosceles triangle is determined by the length of the base and the opposite angle.
If the base is fixed, the height (or distance) can be found by measuring the angle. In this geometric sense, the top angle is called the parallax.

Distance to a comet
As an introduction to the use of parallax in astronomy we first discuss an example where the base of the parallactic triangle is the distance between two observers on Earth. 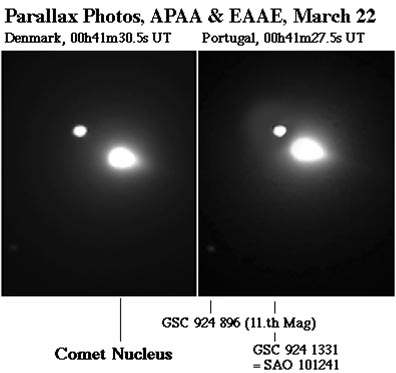 These photographs from the 1995 passage of comet Hyakutake were taken at the same time by two amateur astronomers at different places: one in Portugal and the other in Denmark.
It is clear that the comet's position appears shifted with respect to the background star.
This is an example of a parallactic shift; the comet is much closer to the Earth than the star, so that its position in the sky depends on the observer's location.

Bring the two images together to see the stereo image.

The apparent shift in position of the comet in the photographs arises from the fact that the observers were situated about 3000 kilometres apart, and the comet is much closer than the stars beyond. The baseline in this case is the distance of 3000 km.
With this information, together with the measurement of the apparent shift in the photograph, the distance to the comet can be calculated. 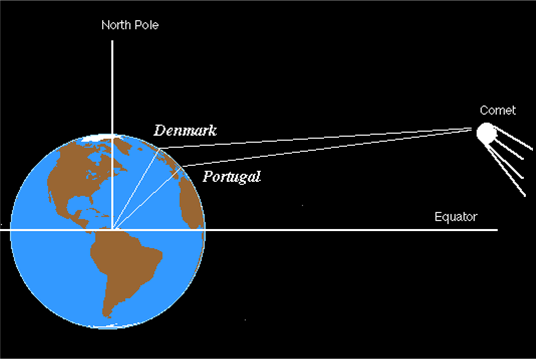 In the example above, the base was the distance between two different observers and the photographs were taken at the same time.

In most cases when using parallax in astronomy however, there will be one observer and the photographs will be taken at different moments.