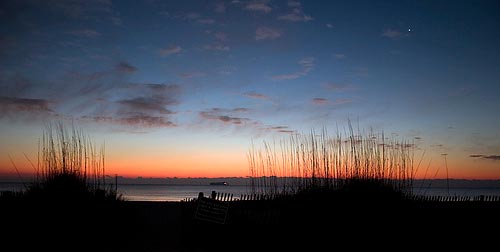 Photo: flickr.com/photos/rachelpennington Just before Sunrise each day, the light of the Sun will wash out the sky and we cannot see the stars anymore. But because the stars are rising 4 minutes earlier every day, at some day we will be able to see a star that we could not see before, just before the Sun washes out our view to the stars. That day is the heliacal rising of that star.

After that, the star will be visible a little bit longer every day, until about half a year later, it will set in the western sky just before sunrise. The term Heliacal comes from the Greek “Heliakos” meaning “solar”, “of the sun”. In this context it means "close to the Sun".

Heliacal rising of Matariki
In New Zealand, Matariki has its heliacal rising in late June, which in the southern hemisphere means close to the winter solstice on the 22nd June. This solstice is generally called the summer solstice, but that is only valid on the northern hemisphere. The seasons are opposite north and south of the equator. (See our module “The Rhythmic Sky”).

Frames generated with Skymap Pro This animation shows how Matariki rises just before the Sun every morning in the period 5 June until 25 June 2009 as seen from the position Christchurch, New Zealand. This is at astronomical twilight when the Sun is still 18 degrees below the horizon (about 6:20 am Local NZ Time). The Sun is the yellow dot at the bottom right on the solid white line, the ecliptic. You can clearly see how the stars rise a little bit earlier every day with respect to the Sun.

Matariki is indicated by the red circle in the first and last frame of the animation.

On 15 June it crosses the horizon at that time in the morning. It is difficult to define the time of heliacal rising accurately, because when the cluster is first seen, also depends on the eye sight of the observer, and on atmospheric and weather conditions.

Note that the constellation Orion (to the right) rises at about the same time as Matariki. The Great Hunter is still chasing the Seven Sisters. The Hunter is upside down in this southern hemisphere view.

Note also that on the 18th June the Moon appears in the top left of the image. It is visible until it disappears below the horizon on the 22nd June. The New Moon is when the Moon passes the Sun on 23rd June. For most Māori the New Moon is the start of the New Year.

In 2009 this heliacal rising is made more spectacular by the presence of three rocky planets. Venus and Mars are clearly visible at about 20 degrees over the horizon, while Mercury will stay closer to the horizon and disappears on the 23rd June.

A star will appear for the first time in the pre-dawn sky approximately one year after its previous heliacal rising.
Therefore the heliacal rising of any star will, dependent on the location on Earth, define one particular day during the year, and therefore this principle has been used by many cultures as a way to define their calendar.

In practice it will often not be possible to be as accurate as one day, because of varying atmospheric conditions and of course the weather. But this technique will be accurate to a few days, especially on locations where one has a clear view of the horizon. And that is certainly no problem in the Pacific.