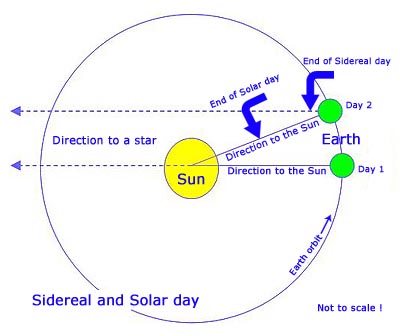 First we must explain the difference between the motion of the Sun and the stars.
Every day that the Earth rotates once about its axis, it also moves a bit further along its path around the Sun. It takes about 365 days or 360 degrees for a complete orbit around the Sun, so in one day the Earth will move about one degree in its orbit. This means that the Sun, as we see it from Earth, moves in the sky slightly differently from the stars.
The diagram shows that after one full rotation of the Earth, the same stars will be at the same location in the sky. But as seen from Earth, the Sun is lagging behind a little and the Earth must rotate a bit (one degree) further before the Sun is at the same position where it was the day before.
As a consequence, the stars rise each day about four minutes earlier than the Sun. The period that it takes a star to return to the same position in the sky is called a Sidereal day, and for the Sun that is a Solar day. A sidereal day is thus about 4 minutes shorter than a Solar day. This is the reason why every day at the same time, new stars rise above the horizon. 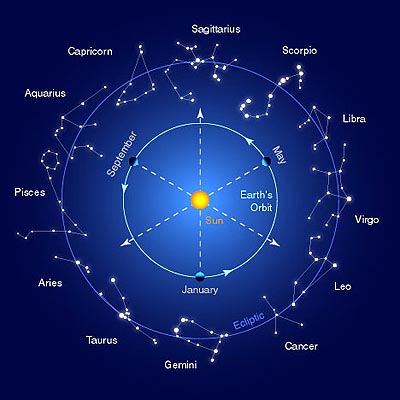 Throughout a whole year we see the entire sky passing by and this explains why we see different stars and constellations at different times of the year.

A different part of the night sky is visible from the dark side of the Earth, throughout the year.