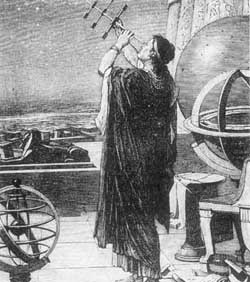 Magnitude is a historic concept. Hipparchus, about 190-120 BCE, categorized stars of the 1st magnitude (for the typical brightest stars) through to stars of the 5th magnitude (faintest to the eye). This describes the brightness of a star without any reference to how far away it is and is denoted with a lowercase m.

Hipparchus thus classified stars by their relative brightness and began the magnitude scale. This classification was based on visual observations because in those days they could not measure flux or brightness with photometers like we do today.

Hipparchus defined a magnitude +2 star as half as bright as a magnitude +1 star. The total range of his scale was from +1 (brightest star) to +6 (dimmest visible to naked eye). In effect this is a logarithmic scale.

This means that for every unit increase in magnitude, the brightness increases by a factor of 2.512 because

This was expressed by Pogson in 1856 as the “fifth root of hundred” ratio, or the Pogson’s ratio.

The observed magnitude is since referred to as Apparent Magnitude with symbol (m) and is still widely in use today.
In order to have a similar measure for a stars luminosity, the concept of Absolute Magnitude (symbol M) has been defined as the apparent magnitude that a star would have at a standard distance of 10 parsec (pc).

Negative magnitude
With refined methods to measure brightness, it has been found that there are stars actually brighter than magnitude +1 stars. These are given a negative number for their magnitude.

Note that the star Vega is the reference star for the magnitude scale (m=0).

Which of the two is brighter and by how much?