Getting a payload into Earth orbit requires a frustratingly large amount of energy. This has nothing to do with orbital motion, but is because we also need to launch a large amount of rocket fuel and a whole structure of a rocket to make it happen. Once we are in orbit and the spacecraft has the necessary velocity (speed and direction) it follows a freefall orbit which generally is elliptic as we saw. You do not need any further energy to maintain that orbit. The launch of a spacecraft is thus the propelled trajectory designed to bring the spacecraft into the required initial conditions of free fall. And the velocity (direction and speed) once in orbit determines where the spacecraft will go

Let us now go back to Newton’s animation of the canon at the mountain top. You may already have found that at the minimum speed of 6.84 km/s the cannon ball just falls around the entire Earth (it is actually closer to 7.9 km/s as we stated above). If you now stepwise increase the initial speed you will see that the orbit becomes a little more elliptical as it extends further at the opposite side of the Earth. However the cannon ball keeps coming back to the canon where it took off. 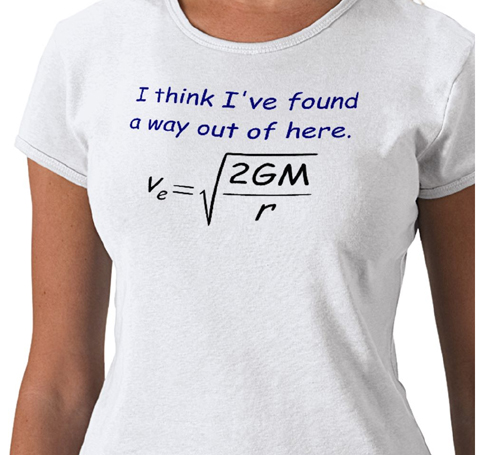 The shape of that orbit is no longer an ellipse but a related shape called parabola. Beyond escape velocity the orbit becomes a so-called hyperbola.

The diagram below shows the conditions for the various types of orbit. For Earth the escape velocity is just above 11 km/s. 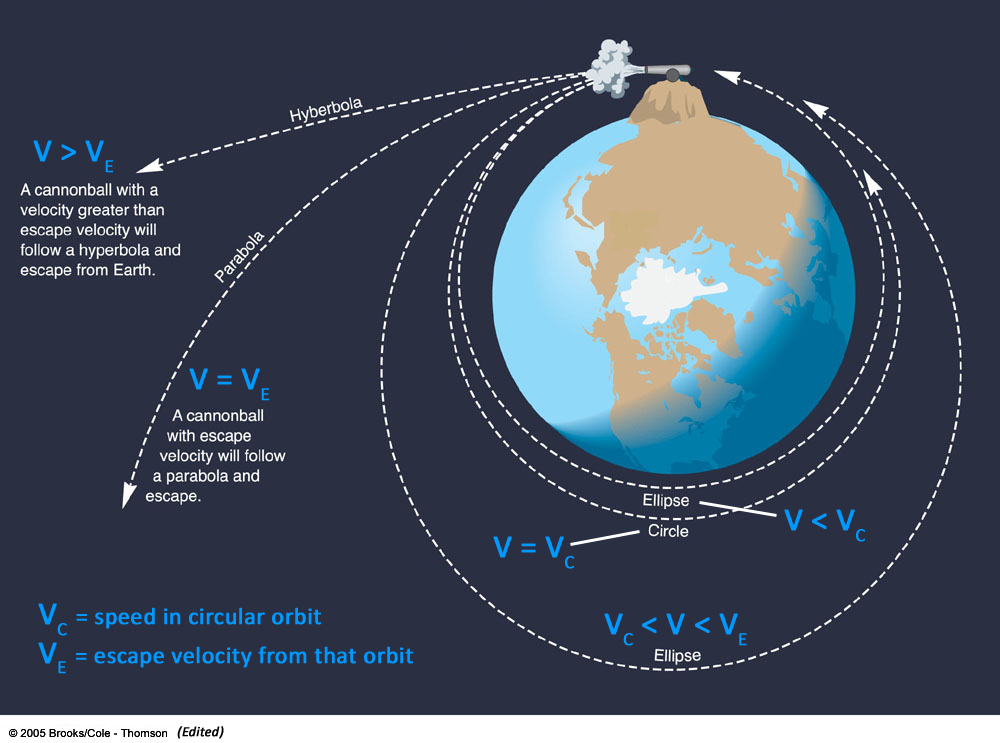 To get a feeling for the possible variations in orbit have a play with this animation that in particular shows how the initial velocity vector defines the orbit (you must drag your mouse to choose the initial vector).

Once the object is launched, it follows a freefall orbit that can either be an ellipse, a parabola (special case) or a hyperbola.

Before we go into deep space let us first look at spacecraft in Earth orbit. 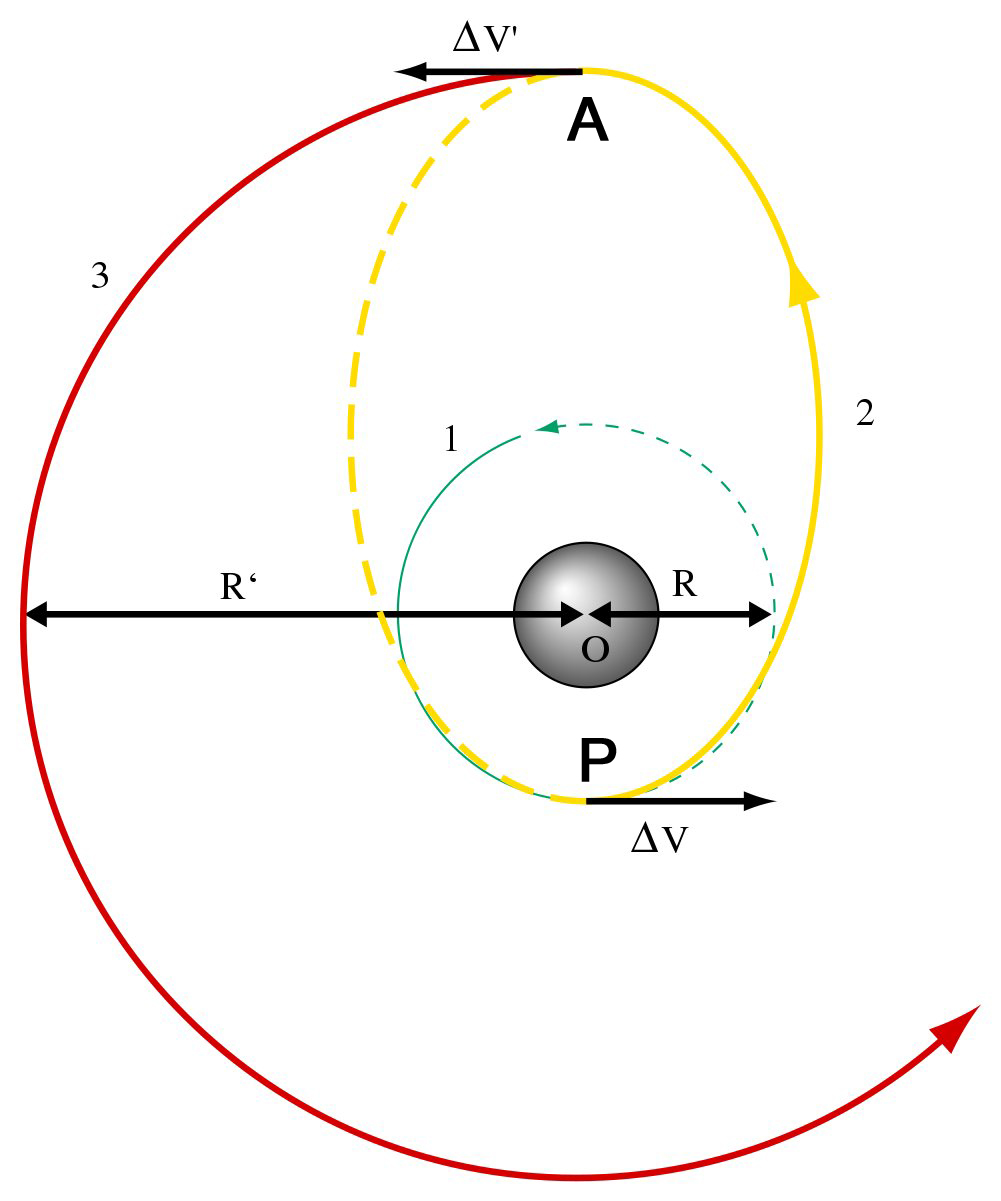 Hohmann transfer. Image source: Wikipedia For reasons of fuel efficiency actual space missions very often start with bringing the spacecraft a circular low Earth orbit (LEO) the blue circle in the diagram. Then we can increase the altitude in two steps with the so-called Hohmann Transfer.

At one point P we burn a booster rocket for a short time. The orbit then becomes an ellipse where the point we started from is the perigee, the closest point to Earth (and the radius of the original circular orbit is the perigee distance). At the furthest point A (apogee) in the new orbit, the yellow ellipse, we burn the booster again for a short time and if we do this precise the orbit becomes another circle (the red orbit) but now with radius equal to the distance to the apogee.

The ∆V’s in the figure are the increments in the velocity that we apply by the boosters. Very little energy is needed for these manoeuvres and they are far more efficient than bringing the spacecraft directly into the higher circular orbit. At typical satellite altitude a 1m per second speed increase will raise the orbit by about 3 km. During these two short burns the spacecraft is being accelerated but otherwise it continues in a free fall around the Earth. The same technique but in opposite direction is used the bring a spacecraft back to Earth. The burns are then called retroburns.

Orbit maintenance
Over longer periods an Earth satellite will experience some orbital decay (loss of orbital energy) due to surface forces such as solar radiation pressure, atmospheric drag, etc. This results in a lowering of orbital altitude (and actually increase in orbital speed; see the formula for VC above). In the case of the ISS the ground crew initiates regular short booster buns to bring the orbit back to its nominal altitude. This video is an excellent illustration of such a manoeuver and in particular shows how the spacecraft temporarily goes from free fall to an accelerated motion, although everything that is loose inside wants to continue its free fall.

Rendezvous
While we can now launch our spacecraft into pre-designed orbits, the second most important technique in space travel is the rendezvous. This is French for “getting together” or “meeting up”. In space travel it is the ability to let a spacecraft catch up and dock with another spacecraft that is already in orbit. Even in the early days of space travel, e.g. for the Apollo programme in the 1960’s and 1970’s, rendezvous manoeuvres have been absolutely essential both above Earth and in Lunar orbit. 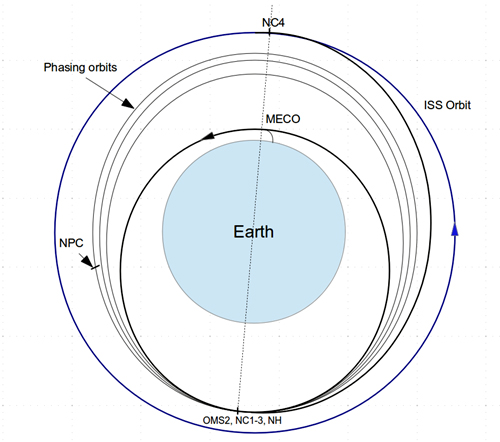 Image from http://www.baen.com/rendezvous First of all the orbits of the two spacecraft must have the same inclination (tilt with respect to the Earth’s equatorial plane) which sets critical conditions for the launch time and location of the visiting spacecraft.

You basically get only one chance to do it right and if you would miss the target, there is practically no way to try again from orbit, because of the impossible fuel requirements for such major orbit corrections.

Secondly for rendezvous with an object in Earth orbit, e.g. the ISS, the visitor is first brought into an intermediate orbit a few km below the target. Of course the timing needs to be right so that not only the orbits are close but that both objects themselves are also at the right position in their orbit.

The next stage of the rendezvous involve small ∆V’s to gradually bring the visitor higher up to the target. This generally requires several orbits to gradually reach the same orbit. Finally the two spacecraft, once in the same orbit, need to be brought together. This is quite counter-intuitive because when the visitor trails the target it will need to slow down to get closer after one orbit and when it leads the target it needs to speed up to meet after one orbit. Such “proximity operations” are calculated using appropriate software to determine the correct burns for a successful rendezvous.

Most Sci-Fi movies and TV series on space suggest that these manoeuvres can be carried out manually by pilots who have clear view of the target, but reality is a lot more complex.
For more on the space rendezvous technique go here or see astronaut Buzz Aldrin’s work.

Undocking and descent
Undocking from the ISS and controlled descent back to Earth is basically the same procedure in reverse. Nothing is done “manually” but this procedure is carefully prepared and carried out with support from both space and ground crews. A good explanation of this can be seen in the third of the ESA movies linked below.