Above we discussed spacecraft that are essentially in a free fall motion in gravity. The only orbital corrections are performed by short bursts of on-board booster rockets or through flyby’s past planets for gravity assist.

Electric propulsion systems for spacecraft have been imagined for as long as rockets in general have been. But lifting a payload off the Earth into space can still only be done with chemical propulsion systems that work with the burning (oxidation) of solid or liquid fuel. We cannot give a full account in this article of non-chemical rocket propulsion systems, (find a good overview here) but want to emphasise that there are good options to use electrical systems while the spacecraft is in space.

The chief advantage of such systems is that they can provide a thrust over long periods of time and with very efficient use of propellant, although the thrust itself is far less than that of chemical systems. This means that such propulsion systems can provide extended periods of acceleration during the space flight, making it more complicated than non-propelled spaceflight, but also making it a lot more economical.

The DAWN mission was launched in September 2007 and visited the asteroid 4Vesta and subsequently went into orbit around the dwarf planet 1Ceres. This mission would have been impossible without the ion thrusters that DAWN had on board. This propulsion system also saved the mission a lot of propellant (fuel and oxidiser) that conventionally would have been used, as it only used a relatively small amount of Xenon gas as propellant. 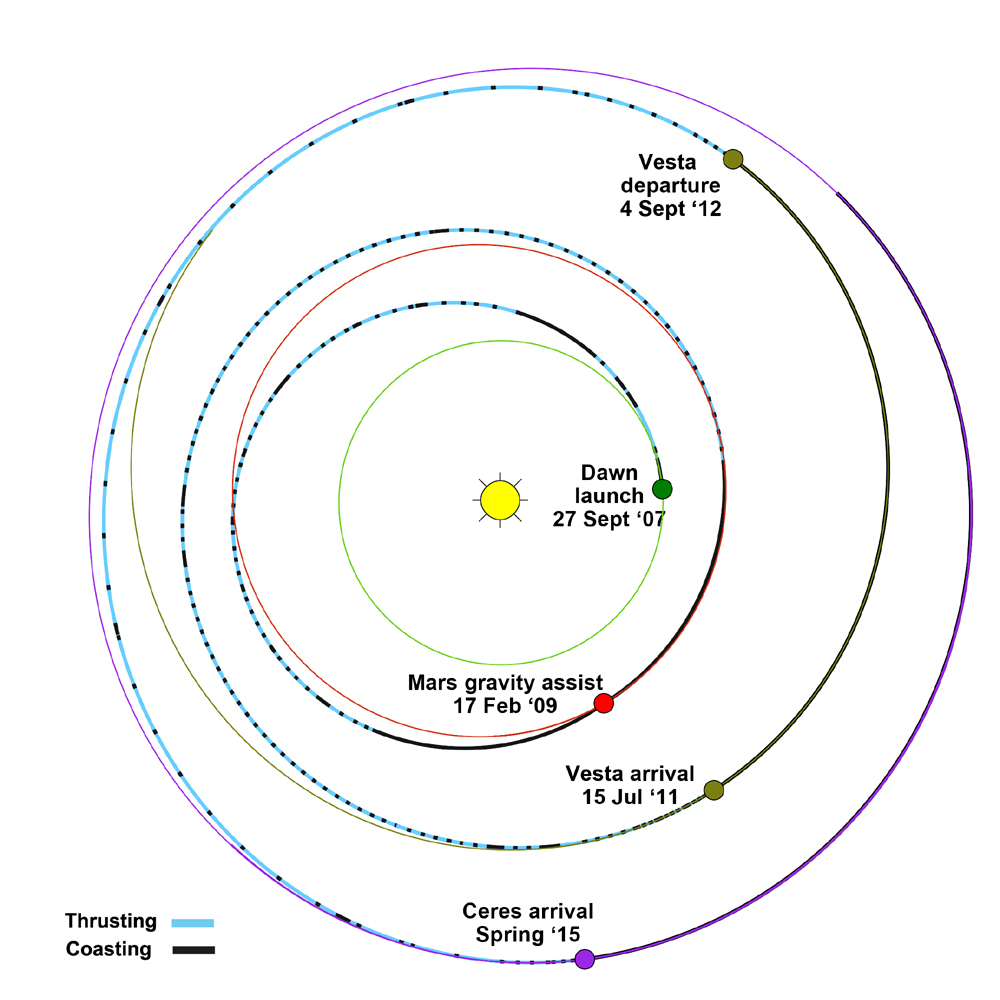 The graph shows DAWN’s trajectory from launch, which included a gravity assist past Mars. It also shows the extended periods that the ion-thrusters were operating (thrusting). Watch an interview with Marc Rayman, Dawn Chief Engineer at JPL discussing the advantage of the Ion Thruster for the Dawn mission here.

A “traditional” trip to Mars such as the MSL mission discussed above takes about 9 months. Then you will have to stay on Mars for another three months before Earth is at the correct position relative to Mars to allow you to go home. An on-board propulsion system could shorten the flight time to Mars significantly (although it forces the system to stay longer on Mars for return missions). This would also have the important advantage that astronauts will not be exposed to harmful radiation and micro-meteorites while in space for too long. On-board propulsion systems are therefore much at the forefront of current research in space technology. An example of this on-going research is the Hall thruster.

No propellant at all?
Arguably the most interesting recent invention that has first been made by British engineer Roger Shawyer is the “impossible” EM Drive. Many scientists have claimed that this idea would violate conservation of momentum, but after years of study and experimentation by several research groups, the idea persists and claims are made that the Cannae drive, which is different but similar to Shawyer’s design, will soon be tested in orbit on a Cubesat. These drives do not require any propellant but only electric energy and in principle employ radiation pressure from microwave radiation leaving an antenna.